Overstock.com (OSTK) was the largest contributor to the positive performance of the Fund. The stock increased in value to $30.79 as of December 31, 2013, up from $14.31 as of December 31, 2012. At the beginning of the year, we had 875,931 shares, comprising just over 30% of the portfolio. As the price of OSTK has now risen significantly and is trading closer to its intrinsic value, we have drastically reduced our position. We held only 15,000 shares as of December 31, 2013.

As a group, our investments in the TARP warrants of Bank of America, JPMorgan Chase and Wells Fargo worked out well during 2013. TARP warrants have several characteristics that make them appealing long-term investments. Specifically, they are long dated, with most expiring around 2018 -2019. This time frame of four-plus years allows banks to grow their intrinsic value to a high enough level to have an appreciable impact on the strike price of the stock warrant. In addition, we believe the strike price will be adjusted downward for any quarterly dividend that exceeds a set price. This is rarely seen in a stock warrant. An example: for Bank of America, class ‘A' warrants, the strike price is adjusted downward for any quarterly dividend paid exceeding one cent per share.

Our common stock investment in MBIA Inc. has also performed well, increasing in value to $11.94 as of December 31, 2013 from $7.85 as of December 31, 2012. There was a big overhang on the stock and that was removed when MBIA Inc. and Bank of America settled their lawsuits. Although MBIA is cheap based on book value, it would make me sleep better if the company receives permission to start writing business again. Investing in companies, where the main operating business is mothballed for a while, makes it harder to evaluate its intrinsic value. Time is not on the side of investors in that type of business.

We had a small holding in Dell Inc. It was trading at $10.13 on December 31, 2012. After a protracted battle, the founder Michael Dell was able to buy out the shareholders at a price of $13.75 per share, plus a 13 cent special dividend.

We substantially raised our position in the common stocks of Resolute Forest Product and Sears Holdings when their stock prices fell to a level where we felt they were compelling bargains. As a result, investors should be advised that due to our portfolio’s high exposure to these two stocks, the net asset value of the Fund can be volatile. However, we are not bothered by this volatility because our focus has always been, and continues to be, on how inexpensive we believe the stocks are, relative to their intrinsic value. Based

We believe that Sears Holdings is a misunderstood story. There are many moving parts but we believe Sears Holdings’ intrinsic value lies in its real estate assets. It also has other valuable assets such as Lands' End, Kenmore, Craftsman and Diehard. Being a traditional department store has become a tough business during the last decade but, according to management, Sears is transitioning its historic focus on running a brick and mortar department store into a business that provides and delivers value by serving its members in the manner most convenient for them: whether in store, at home or through digital devices. The value of its real estate allows Eddie Lampert, the controlling shareholder and CEO, the time and money to effect the changes. If the transformation does not work out as expected, we believe the real estate values are high enough that we would not lose money in our investment at current prices after netting out all liabilities.

In general, we believe that stocks and non-investment grade bonds are fairly valued. We do not time the market but when bargains are scarce, we are happy to hold cash equivalents as an alternative.

The common stock of Resolute Forest Products (RFP) contributed significantly to the returns of the Fund. We do not normally buy common stock for the Fund but every now and then, due to restructuring, we receive shares for a debt security we hold. Such was the case with RFP. We received shares of RFP for our holdings in McMinn County, Tennessee revenue bonds. To cut a long story short, we purchased 15.48 million bonds for a total consideration of $155,800. We paid roughly one cent on a dollar for each bond, preparing to hold them for several years. We knew McMinn’s obligor was AbitibiBowater and we have been following AbitibiBowater story for a while (AbitibiBowater changed its name to Resolute Forest Products in 2011). McMinn bonds belong to a class of creditors that were in dispute with AbitibiBowater 7.95% class bonds, a dispute many thought would not likely be settled for several years. We figured that even if McMinn lost the lawsuit, and 100% of the disputed claim was awarded to the 7.95% class, we would not lose money on the McMinn bonds considering the price we paid. Lo and behold, a few months later, the lawsuit was settled and we received 52,564 common shares of RFP for our holdings of McMinn bonds. At the year-end price of $16.02, these shares of RFP were worth approximately $842,075.

Such a windfall comes maybe once every 20 years and we would not recommend this case as a regular way to invest in bonds. You needed a seller who was desperate to sell his holdings within a short time frame but could not find a buyer. And in a fortuitous way, we had invested in RFP for several years and were well acquainted with the story and the lawsuit. Further, the outcome was also dependent on a quick favorable legal judgment. The lawsuit could have dragged on for years which would have diminished the annualized returns by a considerable margin.

The price of MBIA Corp.'s 14% (“MBIA”) fell following rumors in December that it might not get permission from the New York State Department of Financial Services to pay interest that was due on January 15, 2013. Although the company was not permitted to make that interest payment, the company was not deemed to be in default.

In May 2013, the lawsuits involving MBIA and Bank of America were settled and the price of MBIA Corp. 14% moved up considerably. We sold all of our holdings at $79 apiece. On December 31, 2012 it was priced at 18 cents on a dollar. Normally we don't invest based on the outcome of a lawsuit but we

believed that MBIA had a strong case. Even if MBIA had lost, we believed that we had an even chance of getting our money back. But we also believed that any kind of a positive settlement would see the bonds appreciate considerably, which is exactly what happened. We limited our investment to less than 5% of the Fund's assets even though our conviction was strong.

Not every large holding worked out in 2013. R.H. Donnelley's term loan was down from 68.90 cents on a dollar to 61.20 on a dollar as of December 31, 2013. We bought into it as we believed it was well covered by its earning power, assets, and covenants that are protective to debt holders. In addition, this term loan comes with a cash flow sweep, which means that any free cash flow remaining after all operational needs are met can be used to buy back debt at par from its holders. In April 2013, SuperMedia Inc. and Dex One Corporation, the parent company of R.H. Donnelley and Dex Media West, completed their merger, creating Dex Media, Inc. — one of the largest national providers of social, local and mobile marketing solutions through direct relationships with local businesses. Dex Media estimates it will realize approximately $150-$175 million in cost savings by 2015, and expects to preserve Dex One’s remaining tax attributes of roughly $1.8 billion, which can be used to offset income attributable to the combined company following the completion of the transaction. We continue to believe that at current prices, R.H Donnelley is underpriced.

Source: Made with Photoshop 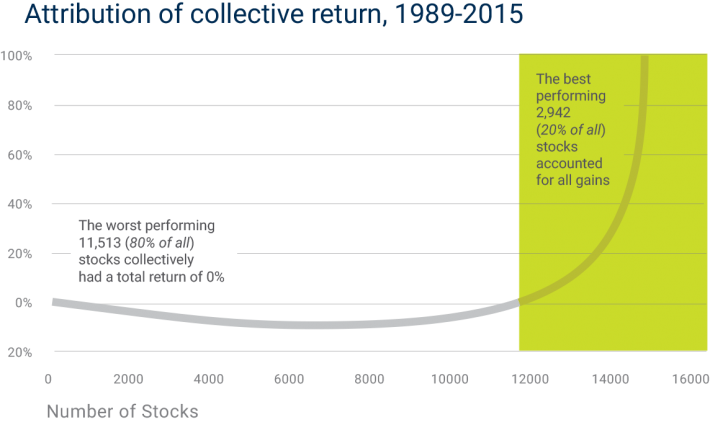 Longboard’s original research proves that over the long term, a small minority of stocks drive returns for the overall market. Get The Timeless Reading eBook in PDF Get the entire 10-part... Read More

Reposting with edits as the prior post is not updating online. Markel (MKL) closed at $785/share as of March 20th. Since the reported book value of MKL was $802 as... Read More