The U.S. Department of Justice has sued Anheuser-Busch InBev NV (NYSE:BUD) (EBR:ABI) as a result of the company's $20.1 billion deal to purchase 50 percent of the Mexican brewer Grupo Modelo SAB de CV (PINK:GPMCF). It has alleged the transaction will lessen competition and increase prices in the U.S. beer market.

After the complaint was filed by the Department of Justice on Thursday, shares of both companies dove.

Bill Baer, head of the DOJ's antitrust division, said in a statement, “If ABI fully owned and controlled Modelo, ABI it would be able to increase beer prices to American consumers. This lawsuit seeks to prevent ABI from eliminating Modelo as an important competitive force in the beer industry.”

The proposed deal has the popular, top domestic Bud Light brand marrying the largest import, Corona. A combined company would bring in potentially $47 billion in revenues.  This isn't the first time the DOJ has been unhappy with deals between the two companies. In a similar transaction, they had previously proposed to lessen antitrust concerns with the sale of Modelo’s share in Crown Imports LLC to Constellation Brands Inc. (NYSE:STZ) for $1.85 billion.

Crown Imports is the joint venture for U.S. distribution that is owned by the two companies and by selling Modelo's stake, AB InBev said it would not be gaining U.S. market share when it acquired Modelo but instead raising its presence in emerging markets. In Mexico, beer sales are increasing at quicker pace than in developed economies including the U.S., which is the world’s second-largest beer market as defined by volume after China, reported Bloomberg.

AB InBev, also the maker of Brazil’s Brahma beer, said it expected the combined company with Modelo to produce cost and revenue benefits of a minimum of $600 million annually. From the takeover, AB InBev’s will advance its lead as the world’s biggest brewer, surpassing No. 2 SABMiller plc (PINK:SBMRY) (LON:SAB).

Both companies issued statements on Thursday with AB InBev saying it didn't see the deal closing in the first quarter as expected and added that regarding the action by the Department of Justice, it is “inconsistent with the law, the facts and the reality of the marketplace. We remain confident in our position, and we intend to vigorously contest the DOJ’s action in federal court.”

Grupo Modelo SAB de CV (PINK:GPMCF) also said via statement to the Mexican stock exchange that the deal would not close this quarter.

Also on Thursday, RBC Capital Markets wrote a research note, “Anheuser-Busch InBev Last year's Modelo?” regarding the news. Analysts have an “Outperform” rating on the stock with a $69 price target.

Their thesis for the report is that without a Modelo acquisition, ABI's share price would be worth 10 percent less.

The numbers: Analysts will not change their forecasts under the assumption that the Modelo deal will go through. If it deal does not proceed and according to Bloomberg from Jan. 17, Anheuser-Busch InBev has indicated that it would be unwilling to sell assets to secure regulatory approval. With this scenario, analysts estimate their EPS forecast would fall by around 10 percent and the price target by a similar amount.

What next?: Analysts don't know how this will turn out but if the deal is blocked, they expect investor focus to return to the possibility of a significant share buy back from Anheuser-Busch InBev; (its net debt/EBITDA target is 2x; without Modelo analysts estimate that it is already there).

Horseman Global, the hedge fund branded by Zerohedge as the "world's most bearish hedge fund" lost -2.68% for investors for the month of July. Year-to-date the fund has returned... Read More 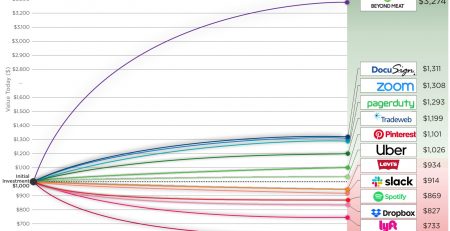 For this article, we look at the performance of the biggest unicorn IPOs as mentioned by a recent Business Insider article. By comparing the opening IPO price with the... Read More