CHICAGO, (July 20, 2016) – Global hedge fund capital increased in 2Q16, recovering the decline from the prior quarter and rising above the year-end 2015 level to reach the 3rd highest quarterly capital total on record, according to the latest HFR Global Hedge Fund Industry Report, released today by HFR®, the established global leader in the indexation, analysis and research of the global hedge fund industry. The industry navigated volatility and dislocations related to Brexit in late 2Q to post asset gains for both 2Q and 1H16. Total hedge fund capital rose to $2.898 trillion as of June 30, an increase of $42.06 billion during the quarter, as the HFRI Fund Weighted Composite Index® gained +2.0 percent in 2Q.

The current capital level was only surpassed in 1Q15 and 2Q15, at which time capital peaked at a record $2.969 trillion, before falling into year-end 2015. Investor redemptions declined to $8.2 billion in 2Q16, decreasing by nearly half of the $15.1 billion outflow in the prior quarter, though 2Q represents the 3rd consecutive quarterly outflow for the hedge fund industry.

Event Driven (ED) led all hedge fund strategies in capital increases in the quarter. Performance-based gains drove total ED capital to $743.1 billion, a quarterly increase of $13.1 billion, as the HFRI Event Driven Index gained +2.8 percent in 2Q16. However, ED experienced net investor outflows of $3.5 billion in the quarter, concentrated in Special Situations and Distressed/Restructuring sub-strategies, though these were partially offset by net inflows into Merger Arbitrage and ED: Multi-Strategy funds.

The HFRI Macro Index gained +1.68% in 2Q, increasing total capital invested in Macro strategies to $557 billion, its highest asset level since 1Q15. Macro hedge funds experienced a net investor outflow of $2.6 billion in 2Q, although this represents nearly a two-thirds decline from the $7.3 billion redeemed in the prior quarter. By sub-strategy, capital in Systematic Diversified/CTA funds rose to $270 billion, also its highest asset level since 1Q15, on quarterly inflows of $1.4 billion; these were offset by outflows in Discretionary strategies. Macro strategies led all hedge fund performance in 1H16 on strong Brexit market reaction, as the HFRI Macro Index gained +3.3 percent, while the HFRI Macro: Systematic Diversified/CTA Index added +4.1 percent.

Hedge fund capital invested in Equity Hedge (EH) funds, the industry’s largest strategy area by capital, rose to $813.9 billion in 2Q, an increase of $7.5 billion from the prior quarter, though total EH assets remain below the YE 2015 level of $829 billion. EH strategies experienced a modest outflow of $345 million in 2Q16, bringing total 1H16 outflows to $5.0 billion. Investors allocated $2.4 billion of net new capital to Equity Market Neutral funds in 2Q, bringing 1H inflows to $5.0 billion for this sub-strategy, though these were offset by outflows from Fundamental strategies over the quarter and entire first half of 2016. The HFRI Equity Hedge Index gained +1.4 percent in 2Q, though the Index remains down -0.4 percent YTD through June.

Capital flows in 2Q were propelled by several large fund liquidations, resulting in a net outflow to the industry’s largest firms (firms with greater than $5 billion in AUM) of $4.4 billion. Firms managing between $1 and $5 billion experienced a similar outflow of $4.01 billion, while approximately $360 million of net new capital was allocated to firms managing less than $1 billion. 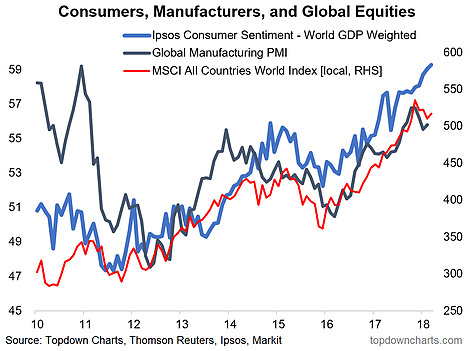 There is a little-watched and relatively obscure set of indicators produced by Thomson Reuters and Ipsos, called the primary consumer sentiment indexes.  These provide a standardized approach to measuring... Read More