In this article we are going to take a closer look at stocks that experienced a significant amount of hedge fund interest recently. Some of these stocks have the potential to become hedge fund darlings over the next 6 months.

Illumina (ILMN) The stock was trading above $35 in February before it received an offer from Roche Holdings AG. The stock jumped above $50 after the announcement and that’s probably when hedge funds bought in. There were 17 hedge funds with ILMN positions at the end of December. That number stood at 49 on March 31st. Unfortunately Roche’s tender offer expired and Illumina currently trades around $44. Hedge funds probably lost more than 10% on this trade. James Dinan and Andreas Halvorsen are among the hedge fund managers that bet more than $100 million on this stock.

American International Group, Inc. (NYSE:AIG) is a candidate to become a hedge fund darling. There were 45 hedge funds at the end of March, vs. 21 hedge funds in December. Bruce Berkowitz has been a long-time AIG investor. His total position in AIG approached $3 billion at the end of March. Robert Pitts’ Steadfast Capital, Steve Cohen’s SAC Capital, and Leon Cooperman’s Omega Advisors initiated new bullish positions in the stock. Government still owns the majority of AIG shares and investors expect government to sell its shares at around $29 which is the break-even price for US Treasury. This creates an overhang and keeps investors away. As the government winds down its stake, we believe AIG could trade above $50 over the next 24 months.

Regions Financial (RF) There were 24 hedge funds in RF at the end of December. That number jumped to 41 by the end of March. Regions Financial sold its brokerage and investment banking subsidiary, Morgan Keegan, for a total of $1.2 billion including the $250 million dividend received. The proceeds were used in the repayment of RF’s $3.4 billion TARP obligation. Hedge funds probably predicted that these transactions would act as a catalyst and RF’s stock price react positively. They were right, RF gained more than 50% during the first quarter. We think the opportunity to invest in RF is gone .Israel Englander, George Soros, and Jeffrey Altman initiated new positions in the stock during the first quarter and profited handsomely (see George Soros’ stock picks).

Equinix (EQIX) is another stock with 50+% return during the first quarter. Philippe Laffont invested nearly $600 million in the stock during the first quarter. He presented his investment thesis in Equinix at the Ira Sohn Conference. He said Equinix could reach $500 over the next few years. Currently the stock trades around $160. Laffont isn’t the only hedge fund manager who got bullish about the stock recently. Billionaires Jim Simons and Thomas Steyer also initiated new positions in this stock.

Global trade peaking is an odd end to what has been a key issue over the past three years. From the obfuscated Trans Pacific Partnership, which at first was... Read More 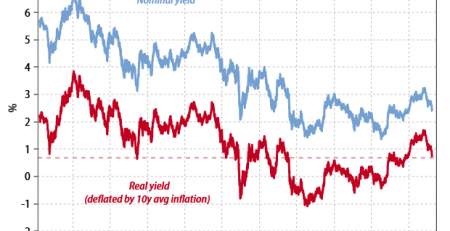