With information on over $30 trillion of traditional, institutional strategy assets and an additional $2 trillion of alternative fund assets reported into our datasets, eVestment has a unique perspective on the asset management industry and the movement of assets across it. Having a holistic view allows us to understand how trends within any one segment derive from trends across the entire industry. This relationship guides our outlook of the hedge fund industry heading into 2016.

The hedge fund industry continues to face dominant short-term and long-term influences. There is consistent evidence to suggest returns influence fund specific flows in the near-term (2-6 months), while allocation preferences and asset class rotation within institutional investors’ portfolios have become the dominant long-term influence on industry and strategy-level growth. If we can understand how these short-and long-term influences manifest themselves, then we can patch together a reasonable view of the future.

Entering 2015, we believed the demand for hedge fund products would be below the level seen in 2014. At the time of that estimation, 2014 inflows through November stood at $111.4 billion and our range was for roughly a 10% decline. Large redemptions in December pushed full-year 2014 flows to $88.3 billion, implying a 2015 estimate of inflows near $80.0 billion. Through November 2015, there has been a net inflow of $66.6 billion, meaning hedge fund flows for 2015 have indeed been below the level seen in 2014, but to a greater degree than expected. Given the fact the industry has endured a seasonal redemption cycle impacting flows in each of the last four Decembers at an average rate of about $16 billion, it appears 2015 full year flows will likely settle far below expectation.

There were two primary reasons 2015 flows have been lower than expected;

If it were not for two major trend shifts, and the persistence of other themes, flows for the industry might have been even lower in 2015. Specifically;

As it stands, aggregate investor interest toward the industry in 2015 is set to be well below that of 2014, but on pace, or above, the level of 2011-2013. As funds of hedge funds have become less influential (declining as a portion of industry AUM from near 50% to 30% in the last six years), direct investment from the institutional community has been the primary driver of industry growth. As the institutional pool of assets faces a diverse set of challenges, feedback from an ongoing eVestment survey of allocators and consultants indicates alternatives will continue to play an increasing role in portfolios, including hedge funds. The following pages will cover our expectations for 2016 and the drivers of investor sentiment around the industry.

The question the industry faced entering 2015 is the same it faces entering 2016: Will institutional investors maintain their investments and continue to allocate more to hedge funds, and if so, at what rate? Our answer for 2015 was, “Yes. Barring a major financial market event, they will.However, if a major market event were to take place, then only the most defensive asset classes would gain new assets…”

Given the areas gaining assets in 2015 (multi-strategy, macro and managed futures, along with long/short equity), investor sentiment toward the industry fell somewhere in between this idea of continued general interest and the effects of elevated market stresses pushing investors toward diversified approaches and historically less correlated strategies. As we look to 2016, we have to consider the drivers of allocation decisions and composition of institutional portfolios across both traditional and alternative asset classes to understand the demand for new hedge fund investment.

Two large drivers of the composition of institutional portfolios are relative performance and asset allocation policy shifts. One of the largest influences on the distribution of assets in the last two years has been the relative strength of US equities. In the three years leading into 2015, in USD terms, the S&P 500 outperformed most major regional equity exposures and fixed income sectors. As a result, institutional portfolios could either passively become very overweight US equities, significantly adjust allocation policies (actively choose to become overweight US equities), or redistribute gains to remain within limits of desired exposures around the world and across asset classes. The first option is not desirable, the second takes time, but the can be executed in the near-term.

In 2015 alone, through Q3, traditional US equity products reporting to eVestment have seen outflows of $212 billion. In 2014, the universe had net outflows of $220 billion and in the last three years there has been nearly $630 billion removed from traditional US equity products. The relative strength and redistribution of gains from US equities has provided a base to support the hedge fund industry’s average growth of near $70 billion/year over the last three years.

Who Benefits in an Uncertain World?

Longer lock-up, private credit funds, generally classified within the private equity universe, have seen strong demand from the institutional community. This is expected to continue in 2016. However, given the uncertain rate environment and the elevated redemptions from traditional fixed income products, we do not expect the current level of negativity toward credit hedge funds to persist throughout 2016. Rather, credit strategy fund flows will likely be slightly positive in 2016 as the rash of redemptions peters out in H1 along with limited, but apparent new demand for flexible approaches to an uncertain rate environment.

Aggregate flows for event driven strategies are also unlikely to rebound significantly in 2016. Many products in the universe offer alternative approaches to extracting value from public and private markets, however the level of uncertainty for continued major equity market gains in 2016, offset by interest in less correlated special situation investing should result in muted, yet positive net inflows for the universe once overhanging early year redemption pressures ebb.

Multi-strategy products have a confluence of factors that can effect investor interest in 2016. Flows have been overwhelmingly positive for the universe since the European sovereign crisis and if money is expected to continue to leave the long-only space in favor of alternatives, multi-strategy products offer a level of diversification, and with it comfort, for a hedge fund investment. Performance must also be considered as money is not going to flow into products with a recent history of losing money. This is where things look less positive for the multi-strategy universe, at least less positive than 2015. While aggregate performance has been generally lackluster, performance has been mixed among the largest asset gainers in 2015. There are several large products that have performed well over the last two years, while returns have generally been poor among the few with meaningful redemptions.

Given the expectation for a continued shift toward alternatives, which includes increases in hedge fund allocations and the diversity and return potential exhibited among the multi-strategy space in 2015, we should expect inflows to continue into 2016. It is doubtful inflows will match 2015 levels, but within the 2013-2014 average near $30-$35 billion is possible.

Macro and managed futures products were considered a question mark entering 2015. Each universe had experienced aggregate net outflows in the two prior years, but both emerged as sources of above average returns toward the end of 2014. Whether investors would return to these products enmasse was uncertain, but ultimately they did. Performance in 2015, however, was mixed. Financial media has well-documented specific fund losses late in the year, but the greater reality is that for every large loss there have been many products which followed outstanding 2014 returns with a relatively good 2015. Large investors, however, are not necessarily known for wanting to navigate mine fields in search of less correlated returns.

We have somewhat of a dilemma when thinking about 2016 flows for the macro and managed futures universe. There have been products performing well, but also pockets of large losses. 2016 will likely bring more strong moves in the commodity and currency markets, along with volatility in equity and fixed income which can make macro and trend-following products more appealing. Additionally, preliminary results from eVestment’sfirst survey of institutional asset owners shows macro among the strategies most in demand in 2016. While there is an air of negativity brought by a segment within these universes, it is impossible to ignore the voices of investors and the availability of decent relative returns. For this reason, we expect the macro and managed futures universes to be a positive area for the industry in 2016. There will, however, likely be near-term redemption pressures in Q1 as asset shift away from the underperforming areas.

Equity-focused hedge funds followed a very strong year of inflows in 2014 with a fairly good 2015. Investors allocated with a regional bent, focusing on exposure to Europe and Asia, but also into quantitative strategies and even the most traditional types of global long/short strategies. Demand was not excessive, however, which indicates that institutional investors’ redemptions from traditional US equity exposure has not flowed heavily to this group.

Looking at 2016 for the equity-focused universe, given the large portion of assets to be redistributed from traditional US equity redemptions, there is a base of money flow likely to support this universe. Conversely, the outlook in China far less rosy than this time last year, but demand remains for more flexible approaches to global equity exposure. Additionally, our survey results indicate long/short equity is also a strategy for which institutional investors have above average interest heading into 2016. With the points in mind, allocations to equity strategies will likely continue in 2016 with a good chance to surpass the level of allocations in 2015.

The hedge fund industry is, barring the occurrence of an outlier event, in a decent position for another year of growth. Inflows should be supported by the continuing slow and steady reallocation of assets from traditional to alternative strategies. Investors responding to eVestment’sinstitutional allocation survey have indicated they anticipate increasing their exposure to hedge funds in 2016, however the universe of products is expected to see lower increases than both private equity and real assets/RE/infrastructure, an indication the institutional community continues to be willing to sacrifice liquidity for less-correlated sources that will help to meet target returns.

If full-year 2015 flows ultimately rest in the $50-$60 billion range, 2016 should be expected to meet, or beat this level. With interest in multi-strategy products as a key source of support, less drag from credit and event driven funds, along with continued interest in macro and managed futures products and interest across the directional and market neutral equity-focused universes, the outlook for the hedge fund industry appears to be generally more positive than the pockets of negativity in H2 2015 would lead us to believe.

Oracle Corporation (NASDAQ:ORCL) is the latest company that will pay a significant portion of its 2013 dividends early, in an effort to dodge potential fiscal cliff tax increases. The company made... Read More

Gold The Next Big Bubble or A Great Hedge Against Declining Dollar?

Gold has been on a ten year uninterrupted rally which has lead gold prices to the current price of $1,652.  One would think that after so many years of... Read More

Valeant CEO On The Latest In Bid For AGN [VIDEO]

Valeant Pharmaceuticals Intl Inc (NYSE:VRX) (TSE:VRX) CEO J. Michael Pearson, says his company will be persistent and patient with its bid for Allergan, Inc. (NYSE:AGN), but will not sacrifice... Read More 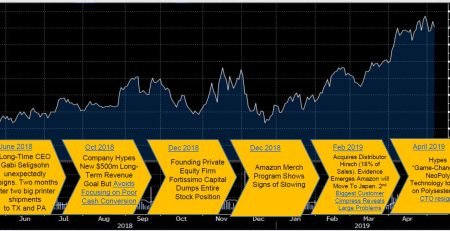 The author of this article may have a short position in GlenCore Ivan Glasenberg joined the company just as Mark Rich fled the United States to Switzerland and renounced to... Read More