LONDON 17th JUNE 2016 – The value of European assets could be severely impacted should Britain take the decision to leave the European Union (EU). This is according to a survey of almost 1,500 global dealmakers involved in mergers and acquisitions (M&A), released by Intralinks, a provider of secure content collaboration solutions.  In the survey, 65% of M&A professionals believe the value of European assets will be negatively impacted if Britain voted to leave Europe. This has wider implications on the European economy, particularly major economies such as Germany, which heavily rely on cross-border deals from China.

In the survey, 76% of global dealmakers stated a British exit from the EU will have a negative economic impact and 67% of dealmakers believe it will negatively impact M&A levels across all of Europe.  These results are starker among respondents directly impacted by the Brexit referendum, being held on the 23rd June. 87% of dealmakers in Europe, Middle East and Africa (EMEA) and an overwhelming 92% of UK dealmakers believe a British exit from the European Union will have a negative economic impact. 73% of EMEA and 88% of UK dealmakers also believe an exit will have negative impact on M&A levels in Europe.

“There’s clearly a consensus among dealmakers that a ‘Brexit’ will lead to chaos for European M&A,” said Philip Whitchelo, VP Product Marketing & Strategy at Intralinks. “A ‘Leave’ vote from the UK could severely impact all of Europe’s assets, with foreign buyers bidding less for them if the UK pulls out of Europe. This could have drastic consequences on the European economy – and of course the UK economy – for a number of years.”

Intralinks Holdings, Inc. (NYSE: IL) is a global content collaboration company that provides cloud-based solutions to control the sharing, distribution and management of high value content within and across organizations according to the highest-level of security and the most stringent compliance regulations. Over 90,000 clients and 99% of the Fortune 1000 companies have depended on Intralinks to digitally transform and simplify critical business processes, and secure high-value information. With a 20-year track record of enabling high-stakes transactions and business collaborations valued at more than $28.1 trillion, Intralinks is a trusted provider of easy-to-use, enterprise strength, cloud-based collaboration technology. For more information, visit www.intralinks.com.

Insiders Sell Stock At Fastest Pace Since 2012 In Market Dip

A group of investors who correctly timed the stock market’s bottom in March isn’t bargain hunting yet during the current selloff. Instead, they’re stepping up sales, flashing an ominous... Read More

Count Goldman Sachs as one of the S&P 500 bulls. Although not exactly at the level of Jeremy Siegel, analysts from Goldman are out with a new report which... Read More 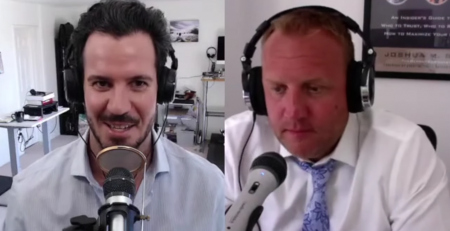 During his recent interview with Tobias, Joshua Brown, CEO of Ritholtz Wealth Management, and author at The Reformed Broker Blog, discussed how you can successfully adapt the Peter Lynch... Read More

The battle for the Portuguese telecommunications assets of Brazil's Oi SA is heating up. It was announced Wednesday that private equity funds Apax Partners and Bain Capital have made... Read More

Economists love to talk about money, and in particular the money supply. It’s covered in every beginning to advanced macroeconomics course. Why do economists consider money supply so important? Largely... Read More