Getting Out of Embed The Role of Social Context in Decision Making by Michael Mauboussin August 3, 2006

Social psychology… reveals a major lesson: often it is not so much the kind of person a man is as the kind of situation in which he finds himself that determines how he will act. — Stanley Milgram

Let’s play a little game: pretend you are a senior executive at Enron or Worldcom in the late 1990s. Your stock is rocking, you and your colleagues adorn magazine covers, and Wall Street loves you. Would you raise your hand, point out the flaws in the company’s financials, and precipitate the inevitable fall from grace?

We all like to think of ourselves as good decision makers—we weigh the facts, consider the alternatives, and select the best course of action. Most importantly, we perceive ourselves largely immune to the influence of others as we decide and act. The facts and our experience carry the day, we tell ourselves, not the behavioral vagaries of the crowd.

Unfortunately, our perceptions do not accord with how the world really works. Decision making, whether it’s in the board room or on the trading floor, is an inherently social exercise. Our social context, the behaviors and attitudes of those around us, powerfully influences how we decide.

Psychologists call our failure to recognize the situation’s importance the fundamental attribution error. When observing the actions of others, we tend to attribute the behavior to their character. Condemning bad-behaving individuals comes naturally. We also slip naturally into bad behavior if everyone else around us behaves badly. (Yes, Mom told you so, and she was right!)

Embedded social context is important for decision makers on a couple of levels. First, the more aware you are of your social surroundings and how the group can affect you, the better decisions you’ll make. Seeking and considering diverse viewpoints helps dilute the potentially negative consequences of context.

Second, carefully consider social context when you assess someone else’s decisions. In what Warren Buffett dubbed the institutional imperative, executives frequently follow the practices of the crowd, whether in mergers and acquisitions, compensation, or competitive strategy. The issue is not so much judging right and wrong as recognizing the powerful human proclivity to conform.

To demonstrate the importance of social context, let’s look at three famous social psychology experiments, each of which provides a slightly different lesson. The experiments show why even intelligent people can behave in very unintelligent ways when put into a specific social situation. If you’re sure you would have been a whistle blower at one of the scandal-embroiled companies, read on.

Getting Out of Line

Asch’s experimental group had eight members; seven were in on the experiment and the eighth was the subject. To start, Asch asked the group to solve a very simple problem: determine which of three lines matched the length of a separate, fourth line. Going around the table, each participant named their choice aloud. In the first few trials, all participants chose the right answers.

After the control trials, Asch signaled the seven members to start making obvious mistakes. While many subjects expressed shock at the obvious mistakes of the group, 35 percent of the subjects conformed to the group’s incorrect judgments. Think about that for a moment: over a third of the participants conformed to the majority, an especially surprising result for such an unambiguous task.

Asch tested some side issues as well. First, he allowed the majority to air their answers but asked the subject to answer in private. Under these conditions, subjects did not conform to the incorrect responses.

Currently, the US is going through a shale gas boom over the past decade since new drilling technology came out along with growing demand among oil and gas companies. ... Read More 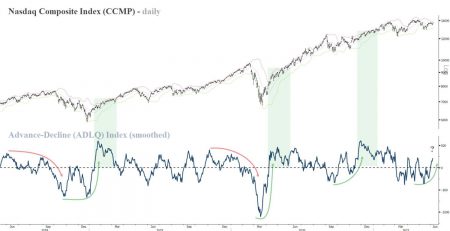 Hedge funds declined 0.35%1 during the month of October - their first monthly loss after seven straight months of gains. Despite being in the red this month, hedge funds... Read More

A Pile Of Dead Unicorns Is Not Around The Corner

A Pile Of Dead Unicorns Is Not Around The Corner by Adley Bowden, PitchBook It's been predicted that the current downturn in venture is going to lead to a pile of... Read More