In a new report by the research firm Preqin, at the end of 2011, private equity had $3 trillion in assets under management for the first time.

In addition, according to the Wall Street Journal's David Benoit, there was a nine percent rise in assets under management last year, including unrealized portfolio values and “dry-powder” that funds will invest.

While the nine percent growth sounds positive, Preqin said this represents a slower growth than the big growth times for buyouts during 2004 and 2007 when assets more than doubled. Even with the growth figure, some private equity firms aren't seeing large returns with with their interested investors.

Preqin's Bronwyn Williams, manager of Preqin's performance data said of the numbers,“The sustained growth of industry assets highlights the fact that private equity continues to be attractive to institutional investors that are willing to forgo liquidity in return for outperformance. Despite the uncertainty and volatility that has prevailed in recent years, faith remains that private equity fund managers can still deliver these returns.”

Also noted by Preqin, data disclosed that private equity is not created equally. Distressed funds are “consistently” outperformers in the general population with a growing gap between the top 25% performers versus those at the bottom.

And some private equity firms fare better than others. KKR&Co. (NYSE:KKR) has been the top since entering the scene in the 1980s with the RJR Nabisco deal. In its recent second quarter earnings report, the firm's profit more than doubled thanks to its growth in its main investments and additional earnings from private equity funds interest, reported CBS.

So with private equity grabbing a record-high $3 trillion in assets, how does this compare to the hedge fund industry?

Through April 2011, it came in behind with $2 trillion in assets but a recent Towers Watson report had the figure growing to 2.6 trillion assets under management by the end of this year.

Similar to private equity, not all hedge fund managers are created equally and the returns found came be a product of a hedge manager's ability.

One of the top hedge fund managers is one of our favorites, the billionaire John Paulson of Paulson&Co.  In 2011, the hedge fund incurred record losses and it appears to continue on its trip down south with a bad bet on the European financial crisis.

In a July 10 Bloomberg story, it noted that the firm had suffered losses in all its funds in June even with a rising stock market. Leading the poor month was a 7.9 percent fall in Paulson's Advantage Plus Fund. With this figure, the fund is down 16 percent in 2012.

Paulson wrote in an investor letter at the time, “The risk of a European financial crisis is the largest risk in the market. Our funds are positioned to protect capital when market gyrations produce drawdowns.”

With the first half of the year complete, private equity firms and hedge funds still have time to see annual growth even against the backdrop of the European debt crisis and the slow U.S. economy.

A Great Company CAN be a great Investment

US Bonds: The Trend is your friend until it isn’t…. “As all of us were taught, but most of us have long since forgotten, economic change occurs at the margin,... Read More

Former UBS trader Thomas Hayes who is now on trial for his part in the Libor rigging scandal told prosecutors that UBS distributed an instruction manual on how to... Read More 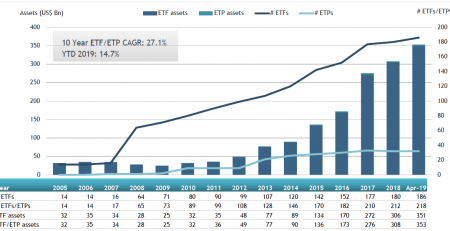 LONDON — July 8, 2015 — A record level of US$152 billion in net new assets (NNA) was gathered by ETFs and ETPs listed globally in the first half of... Read More