Richard Koo of Nomura is out with his latest piece and it focuses on one of the hottest topics, Japan.  Richard Koo is worried about some of Japan's policies and goes so far as to state about the countries Central Banker ‘Mr. Kuroda’s psychological tactic of repeating a lie often enough that it becomes the truth has succeeded brilliantly.' Richard Koo also says that Japanese BOJ actions could causes losses equal to 7.5% of GDP! Below is the full report from Richard Koo titled  Surge in long-term rates/talk of exit strategy highlight problems with quantitative easing.

The surge in Japanese long-term interest rates between Friday, 10 May and Wednesday, 15 May probably caused some lost sleep among bond market participants and policymakers as the 10-year JGB yield climbed 34bp from 0.58% to 0.92% over the course of four days. Had this trend continued, it could well have marked the “beginning of the end” for the Japanese economy.

Fortunately, interest rates settled down that Wednesday and fell back below 0.8% at one point. But as of 20 May the 10-year yield is still trading at 0.84%, which is higher than it was the preceding Thursday. I suspect the rise in yields has left market participants and observers alike much more cautious for the first time in years.

Although the stock market has welcomed the yen’s continued slide against the dollar, this trend needs to be carefully monitored, as simultaneous declines in JGBs and the yen can be interpreted as a loss of faith in the Japanese government and the Bank of Japan. It is also worth noting that small-cap equities and REITs both fell in tandem with government bond prices during this period.

Overseas, meanwhile, a major debate on an exit from quantitative easing by the Fed and the Bank of England seems to be starting in the US and the UK. The IMF has also released a paper discussing the costs of this exit, and I expect the discussion to become more active going forward.

Richard Koo: Sharp rise in JGB yields despite BOJ easing is cause for concern

The rise in Japanese government bond yields that began a week ago last Friday has been attributed to a number of factors. Of primary concern is the fact that it happened at a time when the BOJ was buying large quantities of government bonds.

Until the recent events there was an expectation in the JGB market that bond prices would not fall substantially even if the Bank’s aggressive easing program depressed the yen and lifted inflation expectations as long as the BOJ remained a major buyer.

The BOJ also argued that, like its counterparts in the US and the UK, it was trying to prop up the economy by lowering long-term interest rates with the purchase of longer-term JGBs.

But when the Bank actually started buying these bonds in quantity, interest rates did not fall. In fact, they rose, with the initial rise in rates in the 5-year portion of the curve pushing even mortgage rates higher.

This was initially attributed to poor management of operations by the BOJ where it failed to inform its intentions at the short end of the market. But the events beginning a week ago last Friday occurred in the long-term sector and showed that even large-scale BOJ purchases of JGBs cannot stop yields from rising.

One possible cause of the rise in JGB yields is the bond market’s role as economic “policeman.” As soon as signs of inflation emerge in the economy, bond prices drop and long-term interest rates rise, cooling off the economy and putting a damper on inflationary pressures.

The same is true of deflation. When prices start to fall, bond prices rise, lowering longterm interest rates and providing support for the economy. That is an accurate description of conditions in the JGB market over the last 20 years.

From this perspective, nearly all past inflationary episodes prior to the 1980s happened when the government bond market and interest rates were still under government control (e.g., Regulation Q in the US) and the bond market was unable to act as policeman.

This role emerged as interest rates were liberalized around the world in the 1980s and beyond, and as a result both the incidence and severity of inflationary episodes declined sharply.

Higher inflation expectations inhibit banks from lending at low rates The Kuroda BOJ started off by declaring it would generate inflation with aggressive monetary accommodation. But financial institutions that believe that pledge will find it difficult to lend money at today’s low interest rates.

At a time when the BOJ is declaring it will use all tools at its disposal to lift the inflation rate to 2%, holding 10-year bonds that yield only 0.6% will lead to massive losses.

Hence banks sell bonds, which pushes yields higher, slowing the economy and restraining inflation. That is why the bond market is called an economic policeman.

The financial markets are far quicker to react than the real economy. If a businessman on Main Street sees inflation on the horizon and thinks it might be a good idea to purchase real estate or equipment, it takes time to decide which property or machine to buy and then obtain the necessary funding.

In the world of finance, in contrast, it takes only a few minutes for an investor who senses inflation on the horizon to sell her JGB holdings.

The implication is that the JGB market could plunge and send interest rates sharply higher in a short period of time if people actually start to believe that Mr. Kuroda will use any and all means available to create inflation.

Long-term interest rates typically rise during an economic recovery. But in Japan’s case we are not seeing inflation concerns arise as a rebounding economy approaches full employment. Instead, the government and BOJ have decided to set an inflation target, generate inflation first, and hope that recovery follows.

This means the usual order of things has been reversed, with inflation coming first and recovery second. In this case the increase in long-term rates in response to inflation concerns is likely to

Hottest Links edition for Friday Afternoon (see Tuesday’s hottest links here). We hope to make hottest links a regular feature and this is just the beginning of a great linkfest... Read More

Fading shocks, improving fundamentals and supportive policy should boost global growth to 3.4% in 2016, up from 3.1% this year, notes BAML. Ethan S. Harris and team at Bank of... Read More

5 Important Rules From the World’s Most Successful Investors

Looking for some wisdom to guide you while you’re finding your feet as an investor?  Here are 5 fundamental rules from great investors, past and present. Q3 2020 hedge fund... Read More 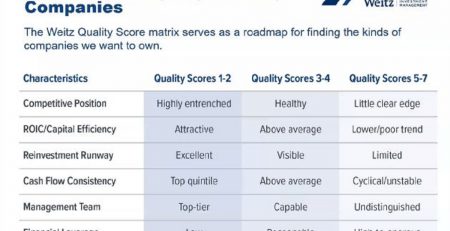 Weitz: How To Identify Quality Companies

In their latest Weitz Quarterly Connection Webcast, the team discussed how they use their Weitz Quality Score Matrix to identify quality companies. Here’s an excerpt from the webcast: Q2 2021... Read More