There have been many Chief Executive Officers (CEOs) of public companies who have come back to lead the firm they once gloriously lead. Since 2005, among S&P 100 companies in the U.S., there have been six CEOs who have returned as CEOs at the same company, with Steve Jobs of Apple being an exemplary 2nd term CEO. This paper analyzes whether these two term CEOs have been successful in their second tour of duty based on changes in share price of their companies during their second tour. The data shows that overall; there is no clear pattern in terms of better performance for second term CEOs. Although the analysis of share prices shows that 2nd term CEOs outperform the CEOs they replace by a wide margin, that number is very highly skewed by astronomical success of Steve Jobs at Apple. Additionally, the analysis of this paper shows that with the exception of two returning CEOs all others were either founders or member of the Board of Directors. Finally, this paper briefly discusses measuring performance of CEOs using Environmental, Sustainability and Corporate Governance matrices.

Second Time Is A Charm? Rehiring The Ex CEO – Introduction

For baseball and movie aficionados, Billy Martin and Elizabeth Taylor respectively are well- known figures. Billy Martin was named manager of NY Yankees baseball team a record five times and was poised to become manager for a sixth time before his untimely death (Salfino, 2014). Elizabeth Taylor was an Oscar award winner who was married eight times, which included two marriages with actor Richard Burton (Taraborrelli, 2011). In corporate world, the opportunity to come back as CEO at the same firm has gone through its ups and downs. From 1993 to 2003, there was an average of 10 ex CEOs who came back at the largest 1500 companies (Jones, 2007). However, the rehiring of CEOs cooled slightly during the 2000s. Usually, only persons who have been able to come back as CEOs have been the founders or member of the Company’s Board of Directors.

CEOs are the face of an organization and set the strategic direction for the organization. Today, CEOs face “enormous pressure to deliver outstanding performance investors demand–and to satisfy other, often conflicting constituencies.” (Nadler, 2007). These conflicting and urgent goals have contributed to the frequent turnover in the C-suite. A study by Booz Allen Hamilton showed that in the United States in 2005 as compared to 1995, 54% more CEOs left their office, and third of those leaving left prematurely due to performance problems (Nadler, 2007). More recent data–from 2000 to 2007–shows that CEO turnover has increased by 16.7% and the average CEO tenure is slightly under 6 years (Kaplan & Minton, 2012). The selection of the CEO is probably the most important decision that a corporate Board of Directors makes. An improper selection can cost an organization money and lost market share. This decision becomes even more acute, when a poor performing CEO is a successor to a very high performing CEO. When the successor does not perform to stock market expectations, the tenure of the successor is abruptly cut short and if the prior CEO is on the Company Board, most likely the prior CEO becomes a very good attractive candidate. The ex CEO seems to be a good bet for many reasons including: (i) prior superior performance, (ii) well versed in the company culture, (iii) held in high esteem throughout the organization, (iii) knowledgeable about the industry the company operates in, and (iv) for the experience of being a CEO. Additionally a former employee “offers companies a known quantity, and of course, valuable experience. They ‘know the lingo. They know the market. They know the ropes.’ ” (Lublin, 1996). Furthermore, some studies have shown that it is better to hire from within the organization (Adams, 2012). Usually, the only downside to the ex CEO becoming a 2nd term CEO is a tarnished legacy (ChiefExecutive.net, 2013). This study shows that hiring the ex-CEO at the same organization does not necessarily lead to better financial performance for the organization. Of the twelve 2nd term CEOs analyzed in this study, six of them improved the firm’s performance compared to their predecessors. In comparison to their predecessors, the increase in share price (as compared to the S&P 500) for the 2nd term CEOs was by 10,642 percentage points. However, this outsize number is heavily skewed by the extraordinary performance of Steve Jobs in his second avatar as Apple CEO. Additionally, there were few 2nd terms CEOs who did not meet the S&P 500 returns, but rather helped their shareholders by reducing the steep rate of stock price decline. Except for two 2nd term CEOs, all of the 2nd term CEOs were either founders or member of the Board of Director and or Chairman of the Board. The ex CEO being member of the Board of Directors has important implication for a successor CEO. The successor CEO is in a very difficult situation since the Board closely monitors the CEO’s performance and also he has to meet high standards set by the predecessor. The successor CEO can be replaced anytime because the ex CEO is available to take over when the successor CEO stumbles.

As discussed later, today’s CEOs are not only being evaluated based on financial performance, they are also being ranked on how their firms manage the other stakeholders, such as employees, environment, customers, and corporate governance issues (together “social” rankings). Although, for the purposes of this study the social rankings are too recent to make a meaningful comparison of social performance for the predecessor and 2nd terms CEOs. The remainder of this paper is organized as follows: a survey of literature is followed by a discussion of the data and its analysis, followed by concluding remarks.

Mason Hawkins Q2 letter to shareholders is out, below is the full thing. The relative underperformance in the quarter came as much from what we did not own as from... Read More

Nearly ten years on from the start of the financial crisis and it looks as if the recovery is well and truly here. According to Bloomberg, the second quarter was... Read More

Oil Industry Is Over Leveraged And Needs $65 Oil

The oil industry is overcapitalized, over leveraged and needs >$65/b oil to survive according to a research report issued to clients of Oppenheimer. According to Oppenheimer's analysis, the prevailing low... Read More 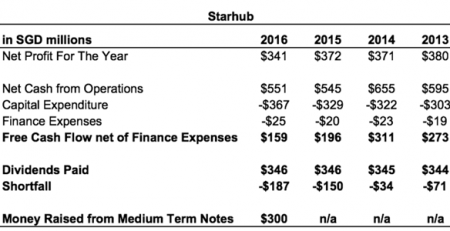 Dividend yield is at the heart of many bad decisions Many poor investment decisions are based off this one metric. After all, everyone loves dividends. Passive income. Financial freedom. That’s perfectly understandable. The... Read More