Using Your Credit Card Could Cost You – ValueWalk Premium

Consumers may want to be careful when using either their Visa Inc (NYSE:V) or Mastercard Inc (NYSE:MA) cards.

Beginning on Sunday, stores in most states got the green light to begin charging a “checkout fee” when a payment is made via a credit card. There are 10 states excluded from this fee including New York, California and Texas.

The change come after a July $7.25 billion settlement between Visa Inc (NYSE:V), Mastercard Inc (NYSE:MA) and nine major banks with merchants to settle charges related to an alleged fixing of credit card processing fees. From the settlement, the credit card issuers agreed to reduce “swipe fees”, which are the fees paid by merchants to issuers when cards are utilized but this will only be for eight months, reported CNN.

In addition, the settlement also allows retailers an option to add a surcharge if a customer uses his credit card. This amounts to covering the processing costs or approximately 1.5% to 3% of the total purchase, according to watchdog group Consumer Action.

There is a 4% fee cap and it will not affect debit card purchases.

The settlement has not been embraced by the retail industry's big players. From the nation's large retailers to small businesses, they have expressed unhappiness about the agreement, saying it transfers the wrongdoings of credit card issuers to consumers.

A dozen-plus retailers joined the National Retail Federation in November to ask a U.S. District Court judge in Brooklyn, N.Y. to reject the proposed settlement. In a brief submitted to the court, the group wrote that the new fees will threaten merchant's ability to keep prices low for their customers.

In a separate statement that had Wal-Mart Stores, Inc. (NYSE:WMT) giving its two cents, it believes that consumers would undergo costs at “tens of billions of dollars each year.” Target Corporation (NYSE:TGT) has called the agreement “bad for both retailers and consumers.”

Keep in mind, whether or not the surcharge is implemented is up to the merchants, but then they face a dilemma: either they are stuck paying a swipe fee bill or assume a risk by transferring costs to customers.

Small businesses have also expressed concern about it and so have the big players been affected by the change.

And Mastercard Inc (NYSE:MA) has also said it doesn't see merchants adding surcharge on concerns of losing business. The company said in a statement, “We anticipate that they will not impose checkout fees, particularly because the value merchants derive from card acceptance far exceeds their costs.”

James Montier: “Finance Has Turned The Art Of Transforming The Simple Into The Perplexing Into An Industry”

Some years ago James Montier wrote a great paper called – Was It All Just A Bad Dream? Or, Ten Lessons Not Learnt. Montier’s states that we can learn a great... Read More 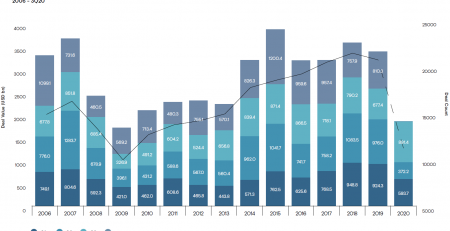 Mergermarket has released its Global M&A roundup for Q1 - Q3 of 2020, including its financial advisors league tables. Take a look at the report HERE and don’t forget... Read More

Third Avenue on some Q3 holdings, see the letter to shareholders here. Brookdale Senior Living Brookdale (BKD) is the largest operator of senior housing assets in the United States, with... Read More

151 private equity funds closed in the first quarter of the year, the lowest number of quarterly fund closes since Q3 2003, when just 82 funds closed Read More