Benjamin Lawsky, Superintendent of the New York State Department of Financial Services halted indefinitely the sale of $39 billion in mortgage servicing to Ocwen Financial Corp (NYSE:OCN) from Wells Fargo & Co (NYSE:WFC). The reputed price on the deal was $2.7 billion. This action raises a few interesting questions. The bottom line is that the actions of the state in this and related issues will ultimately lower the willingness of banking companies to make home loans.

At the heart of the matter is a conflict between the United States government and mortgage loan servicers. The government does not want to see homes foreclosed upon. To stop or slow the procedure it has put in place:

• It has worked with state attorney generals to sue (successfully) mortgage servicers (banks) who foreclose;

• It has litigated against multiple firms where it believes that irregularities have occurred; and

• It has fought hard against the automation of the foreclosure process (robo-signing).

The government has not discovered many institutions that have taken homes away from people who have been paying on their mortgages although that has certainly occurred in a surprisingly small number of instances. The government’s fundamental view, which has been certified in the Qualified Mortgage Standards set up by the Consumer Financial Protection Bureau (DFPB) is as follows:

The fact that a foreclosure

The government’s goal is to keep people in their homes.

The government’s goal is directly contrary to the legal requirements of the loan servicer. The loan servicer is required to foreclose upon homes where payments are not being made and to resell the foreclosed home for the best price possible as quickly as possible. If the servicer does not take this action the lender’s risk is magnified meaningfully by the possibility that the recovery on the defaulted loan may drop to zero – a more normal recovery in recent times has been 35% of the value of the loan.

Ocwen Financial Corp (NYSE:OCN) is primarily a loan servicer. The company’s initial successes were in acquiring FHA backed loans from loan originators and obtaining collections from the government or through the disposition of the property itself. In recent years it acquired Litton Loan Servicing from Goldman Sachs Group Inc (NYSE:GS), Homeward Residential Holdings from W.L. Ross, and the home loan servicing rights of Ally Financial Inc (NYSE:GOM).

While Ocwen Financial Corp (NYSE:OCN) may originate loans in other parts of its company, it does not lend money as a loan servicer. Its job is conceptually very simple. If a homeowner is in default on loan payments, Ocwen must get the lost payments foreclose. Therein lies the problem. The government does not want Ocwen to foreclose and it does not like the procedures Ocwen uses to foreclose.

Why the Wells Fargo and Ocwen Financial's transaction is halted?

What New York State is basically saying, by preventing Ocwen Financial Corp (NYSE:OCN) from making the Wells Fargo & Co (NYSE:WFC) servicing purchase, is that it does not believe Ocwen has yet to live up to this agreement. Ocwen, in the state’s view, is not an acceptable home loan servicer, as yet, and should be prevented from making more acquisitions of servicing portfolios.

Ocwen Financial Corp (NYSE:OCN) is, therefore, in a very difficult position. If it carries out the requirements of its business it must foreclose as rapidly as possible. If it does this the state is likely to restrict its ability to grow its business. If it does not foreclose quickly, the state may applaud its activities and allow it to make more acquisitions of servicing portfolios. However, its clients, the lenders who are not being repaid, will be put at greater risk.

Wells Fargo & Co (NYSE:WFC), of course, is a big bank. It is believed to be the largest originator and servicer of home mortgages in the United States. It is:

Like many big banks, Wells Fargo & Co (NYSE:WFC) has been fined, sued and forced into agreements concerning mortgages that are contrary to the interests of its depositors and shareholders. It is believed that the big bank has modified ¼ of a million mortgage loan agreements to help keep people in their homes at a cost in the tens of billions to its constituents.

It is clearly in the interest of the government to prevent the conveyance of mortgage servicing portfolios from Wells Fargo to Ocwen.

Therefore from the government’s perspective, it makes sense to prevent the movement of a portfolio from very strong hands (Wells Fargo & Co (NYSE:WFC)) to relatively weaker hands (Ocwen). So it is taking the logical step and preventing this transaction.

The skirmish between the State of New York and Ocwen Financial Corp (NYSE:OCN) is relatively small in the overall mortgage battles. However, it does highlight a broad assumption being made by the government in these encounters. The government believes that the need to make mortgages in the banking industry is so overwhelming that these companies will continue to underwrite these loans no matter what the potential consequences. It is the government’s assumption that banks cannot give up the profits that they derive from this activity.

I lack the ability and resources to do the appropriate study but I now question whether making mortgage loans is an attractive business for banking companies. I see a number of impediments that suggest that this is no longer a good business.

I am not sure that any bank has done the cost studies to validate its loan pricing. The assumption being made by the banks is therefore close to that of the government:

At some point, however, it is my belief that the cost of being in the mortgage business may outweigh the benefits. The only solution for the banks is to

Money Manager guest interview with Arnold Van Den Berg. Arnold, please tell us about how you got started in the money management business. I began my investment career in 1968 at... Read More

Markel 2015 Shareholder Meeting Notes - Thanks to a reader for sending this to us. OMAHA, May 3 -- On the weekend of the Berkshire Hathaway 50th anniversary gala that... Read More

Charts Of The Week: Top And Bottom Performing Hedge Funds By Year 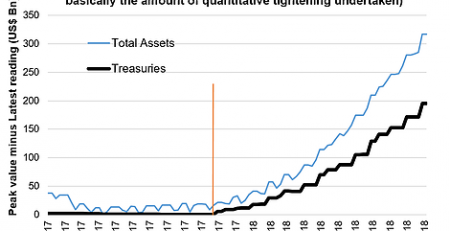 As quantitative tightening moves to full speed, I thought it would be a good idea to update some of the charts from the popular "7 Charts on Quantitative Tightening"... Read More