The Era Of The Fed “Put” Is Over – ValueWalk Premium

The Era Of The Fed “Put” Is Over

To all those investors expecting the Fed to step in to backstop the recent weakness seen in the stock market, Wolf Richter warns: The cavalry isn't coming.

After years of force-feeding too much liquidity into world markets, the central banking cartel is now aware of the Franken-markets it has created. And now with a new head at the US Federal Reserve, and soon at the ECB, central bankers have shifted their priority from supporting asset prices to now actively engineering lower prices.

They just don't want prices to drop too far too fast.

Of course, the big question is: how much control do they really have? The situation may very quickly get out of their hands.

But the big takeaway is to expect lower prices across the board for nearly every "risk on" asset: stocks (including and especially the FANGS), corporate bonds and real estate. The Fed is working to reduce investor exuberance -- and as many bloodied contrarian investors will warn you -- Don't fight the Fed:

Now we're in an environment where we have an Everything Bubble, and even though there's still a few central bankers out there that say that they can't see the bubble, others have now acknowledged it. Of course they don’t call it a "bubble"; they say that prices are "elevated". So they're seeing this. In my opinion, a lot of the responses from the Fed are not really about inflation; they're really about trying to avoid the asset bubble from getting any bigger. They're trying to avoid a deflation of that asset bubble that could be very messy for the financial system.

Which is why they're now tightening. Even though inflation by their measure is still relatively low and below target. And so they're really not targeting inflation; I think they're targeting asset prices. They're trying to put a stop to the Everything Bubble out of fear that it might bring the financial system down again if this goes any further.

There's debt behind this asset bubble, and this leverage is what's risky. So I think the Fed is clearly, this time, on the side of targeting assets bubbles. Investors are asking if the stock market drops, if the Dow drops a thousand or two thousand or five thousand points, is the Fed going to step in and put a stop to it? And my gut feeling is, no, they won't. They will let this run unless credit freezes up. They're trying to bring these asset prices down somewhat. I think that's the environment we're in. We have bubbles everywhere, and now we have Central Banks trying to somehow save the system with minimum damage.

Of course we only have the central banks to blame for this situation. They wanted every investor to go way out on the risk branch, and pension funds have done that. And now, the price to be paid for that will be tremendous.  Most of these insolvent pension funds are state and municipal funds, so taxpayers may be at least partially responsible for picking that up.

This same will probably be true with corporate pension funds. We are seing companies that are going bankrupt, such as Remington, you know, they're guaranteed to some extent by the Federal government and that, too, in the end, is probably going to require that the taxpayer will have to step in.

And as for the pain that rising interest rates will create, this is just the beginning. This has just started. After almost a decade of 0% interest rate policy we don't know anymore what it's like to look at many years of rising interest rates. Money will get a lot more expensive for a lot of companies. And those that have to roll over their debt, even if they're not on LIBOR, if they have fixed rate debt they'll have to roll that over eventually. And when they roll that over, they go from, you know, from a 4% percent coupon to maybe a 6% percent, 7% percent or 8% percent coupon.

As for housing, I think what we'll see is not a dramatic selloff of double digit percentages that we had last time. I think we'll see a long, drawn-out, much more difficult process. At first, it won't even look like a sellout. I think on housing on a national basis, housing will continue to look strong even though the selloff will start in particular cities. You will have some cities that are turning around, but overall, nationwide the numbers are still stable. And so the Fed won't even be worried about it because they're looking at the nationwide numbers, and they're saying, "Oh, it's still okay, it's just declining a little bit" or it's "plateauing" whereas house pricing may be coming down pretty sharply in some of the most bubbly cities. 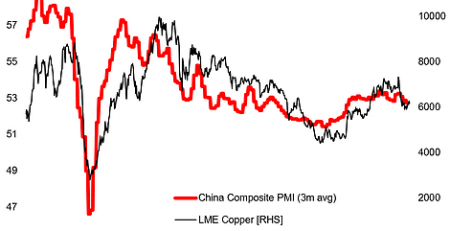 China's economy is clearly under pressure and it shows, whether you look at the limp performance of the Renminbi, plunging Shanghai Composite, softening PMIs, or indeed, the weaker price... Read More